Our Ranking of the Most Romantic Restaurants in the World

Let’s discover the Buttercup flower , how to grow it with care and advice

Simple and elegant, the buttercup flower is a herbaceous plant native to Asia and the cold areas of the Globe. The genus includes more than five hundred species, but the best known spontaneous variety is the one with the characteristic bright yellow five-petaled flower. Let’s get to know it better and discover all the secrets for its cultivation.

Let’s discover the Buttercup, how to grow it with care and advice

The buttercup is a plant belonging to the Ranunculus genus, a family comprising 400-600 species of flowers native to Asia, Australia, Central America, North America, and Europe.

These are plants that produce bright and brilliant blooms that can grow spontaneously in fields or be grown in pots and in open ground, especially in rock gardens.

Some species are considered very rare, while others have an invasive attitude and tend to carpet meadows and hills with their characteristic yellow 5-petalled flower.

Buttercup is a flower native to Asia. The most common spontaneous variety is the one that produces the beautiful five-petaled yellow flower which in summer cheers up fields and hills

Taking care of the buttercup is a very simple task as the plant does not require a lot of maintenance or special attention.

As in the other guides on gardening and on the secrets to cultivate and grow plants and flowers, let’s discover together all the secrets to grow the buttercup in the best way.

History and meaning of the buttercup

The history of this plant is very old. The Turks called it the ‘double flower of Tripoli’, while Apuleius, as far back as 125-170 BC, called it ‘wicked herb’ due to its renowned toxicity.

Its name actually means “little frog” because the first evidence of this flower associates it with spontaneous growth in marshy areas.

The buttercup is also known as the “golden botton” because of the appearance and color of its flowers.

According to an ancient tradition, the buttercups were brought as a gift to the Madonna during Holy Week. The legend, in fact, tells that it was even Jesus who created them, who to pay homage to his Mother took the brightest stars from the firmament and transformed them into flowers.

The buttercup grows spontaneously near streams, lakes, and swampy areas. It does not fear the cold and survives at any latitude

In the language of flowers,  the buttercup is associated with both a melancholy charm and a symbol of languid beauty.

The cultivation of this herb in Italy dates back to over 500 years ago. Already in 1952, Father Agostino del Ricco told of different species of buttercup grown in Florentine gardens.

Classification of the various types of a buttercup flower

As anticipated, in addition to the wild variety with a simple and yellow flower, there are several species of buttercup, some very similar to yellow, red, pink, white, or orange roses. In Italy there are about 80 spontaneous species, of which the best known are:

The grass was typical of cool and humid areas that bloom from January to May, with a bright golden-yellow color.

It is easily seen in the vicinity of hedges and in meadows and blooms from April to September. The calyx flower is formed by a corolla of 5 bright golden-yellow petals.

It is the perennial species typical of the alpine areas, able to grow and thrive up to 3,000 m in height. It has small 5-petaled white-pink or purple flowers, covered with reddish-rust colored hair.

It is the most common variety in humid areas and is recognized for its whole leaves and pale yellow flowers.

It grows near ponds and slow-flowing rivers. It produces small white flowers.

Among the cultivated species we remember:

Ranunculus asiaticus: perennial herb that reaches a height between 30–45 cm. It gives rise to several varieties and hybrids, including  Ranunculus  Africanus also known as Turkish buttercup, S uperbissimus  (or French buttercup), and  Vulgaris is known as Persian buttercup. It produces solitary flowers, single or double, in shades of white, yellow, red, pink, and green.

Ranunculus calandrinioides: spontaneous in Morocco, it is a perennial plant with white and pink flowers that bloom in spring.

Ranunculus amplexicaulis species are native to the mountainous areas of Spain, very suitable for the rock garden. It is known for its delicate pink or white flowering. The flower has a peculiar yellow center and always has 5 petals.

Cultivation of buttercup flower in the garden

They are some of the easiest spring-flowering plants to grow. They adapt well to any exposure even if they prefer humid environments. Although their rusticity makes them strong and resistant to any condition, it is better to avoid long exposure to heat under direct sun. It is a plant native to the colder areas of the globe that needs many hours of light and lots and lots of water.

The ideal soil, therefore, must be rich and moist. In the garden, place the plants next to ponds or small sources of water and prepare the bottom with rock or gravel material.

A plant typically reaches 40 centimeters in height without difficulty. Watering must be abundant and frequent, especially if rainfall is scarce. The best time to fertilize is immediately before flowering.

Cultivation of buttercup flower in pots

The  Ranunculus Montanus is perhaps one of the species of buttercup that is best suited for growing in pots. Its small size, in fact, allows you to easily manage the plant, without giving it particular care.

The leaves are similar to those of the geranium with stems reaching 15 cm. The flowers are single, cup-shaped, predominantly yellow. The flowering period is from May to July.

Another variety very suitable for pot life is the so-called Molten gold with very bright colors.

The burying of bulbs in pots or in planters must take place in a small hole about 10 cm deep. Better to keep  10-15 cm of distance between one bulb and another. For this type of cultivation, choose a fresh and clayey soil, rich in organic substances.

The buttercup needs an abundant and frequent water supply, especially when it blooms. Beware, however, of stagnation in the saucers which can be harmful to the roots.

Terrace or garden. The best tips for decorating this summer 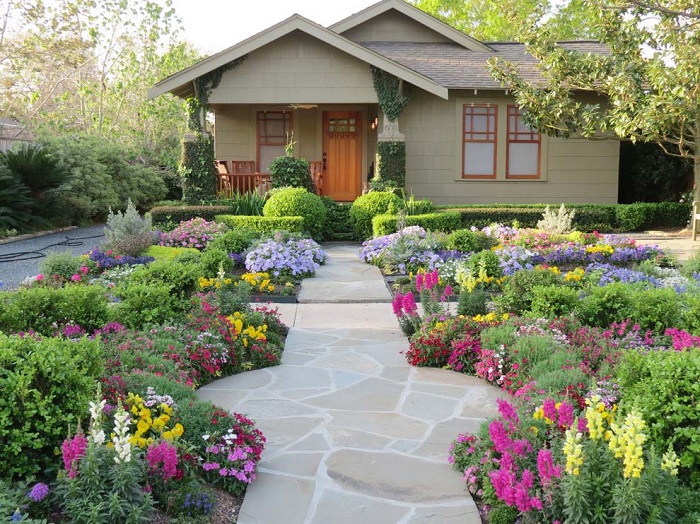